On Nov 25, 2012, I performed my prose poem 'Ink Ocean,' on the Gulf Oil Spill, as one of the featured poets at Nik Beat's HOWL@QSpace in Toronto. I had memorized the prose poem. The image of the ink drawing, from which the poem emerged, only appears in the still for the video (I've included an image at the end of this post for you). I'm actually quite happy with the performance itself - passionate, intense, and yet clear enunciation.

Ink Ocean is about the oil spill that occurred in the Gulf of Mexico in 2010 when nearly 5 million barrels, or 210 million gallons, of crude oil were spilled into the sea due to an explosion of an off-shore drilling rig. It remains the largest marine spill in the history of the petroleum industry.

Over 5 months, hydro-carbon eating bacteria devoured 200,000 tons of oil and natural gas in the Gulf, and then stopped. Despite the massive cleaning efforts by the oil industry and governments, and the efforts of the bacteria, as of 2012, 40% of the spill remains in the waters.

This prose poem began as writing in an ink drawing. It took 6 - 8 months to finish, and was revised in preparation for this reading.  It is an experimental poem structually. A poem of utterance, of cross-currents and paradoxes. It is composed of many voices, and perspective shifts.

There are two parts. The first is on the oil spill, and the second is about love in a world bordering on oblivion, a world that's half spirit. We are in the 6th Mass Extinction on the earth. This is the backdrop.

The poem starts out in the Gulf and moves with the Gulf Stream to the Atlantic Ocean where it becomes a love poem. Can we love in a world inviting extinction? Yes, of course we can, and must.

---
With thanks to Nik Beat, Q Space and Luciano Iacobelli. It was a great evening. 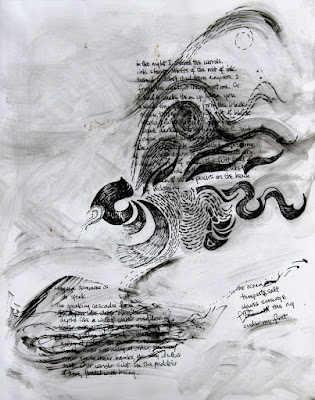 You might not hear all the subtleties in this piece unless you're listening on headphones. But on speakers has a kind of spooky quality, well... as spooky my too sweet and too high voice can get :-).

A version I am happier with - it's darker, and, with the whispering, intense, and perhaps gets to the feelings of the oil spill, and those kinds of pollutions in our lives, and love in the midst of that - in the world we've created, or something like that! Lots of levels in this piece, lots going on, hesitate to give any aspect dominance in a short description.

Where the poem began... which you can read here if you wish. 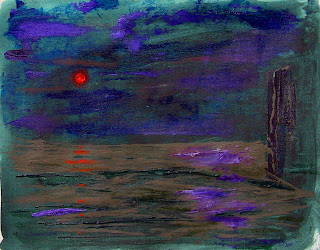