While I never make New Year's resolutions, this little summary appeared under my fingers... do you ever look back to the last new year to see if you accomplished your aims...?

Most of my current, and only, Moleskine folio sketchbook drawings and paintings are collected on my Green Fire webpage. They are all from 2011. At the rate I'm going, it'll be years before I finish the Mole.

During the coming year, I hope to make good headway on filling my Moleskine up with artwork that comes from deep within me.

Before me I have a fairly large canvas, 30" x 40", on which I would like to do a self-portrait. In March I turn 60, and that feels very significant.

I've been working on a 22 minute triptych of poems in a video for 6 months, and sure hope I finish that project to my satisfaction in 2012.

I have five videopoetry projects planned for 2012, and they are important to me, and, hopefully, in 12 months I will be on the other end of their production.

In 2011 I created an on-line journal, VidPoFilm, that focuses on the poetics of a new art form, the video or film poem, and I've written 11 articles for it so far. I hope to begin receiving submissions for articles and see the site start to develop the breadth I wish for it in 2012.

In 2012, I would like to start sending my work out to journals and publishers, something I have not done ever, not seriously (though I have been published here and there, in a few books, some poems and artwork in academic journals, etc.).

In February I hope to start posting my last NaNoWriMo novella in a private blog, which will constitute the first edit. I have a small list of half a dozen people who have asked to read it, so I will let that be my impetus.

I would like to learn how to compose music out of found sound and with the various instruments and loops in Garage Band, but that may not happen.

I hope 2012 finds my plans for a home business coming to fruition in all the ways I hope it will.

There, a quick list of resolutions that I didn't know I had waiting to be outlined.

The set-up for a self-portrait painting. The still-wrapped canvas, 30" x 40", is on the right; a mirror on the left. I took this photo with Camera+ on an iPhone 4, and used some of the effects the app offers (no, my ceiling is not mouldy grey-it's actually white. Yes it is.). How many months will the painting take? Oy, who knows....

A video New Year's wish for you. That your year is...

... heaped with uncommon blessings, and filled with all life has to offer, and that you achieve what is important to you... a simple video card to honour the bountiful gardens we all are, with many good wishes embedded therein.

What began as a test in panning a painting became a New Year's video card! Simple, but sweet. And full of the bounty of the garden of delights. Garden chimes in the background. xoxoxoxo

Wishing You a Bountiful 2012

Hope in 2012 everything
that you hold meaningful
remains and thrives in your life,
a bountiful, living garden,
and,
if you have unfulfilled wishes,
they come to fruition and blossom
in all the ways that you would most like. 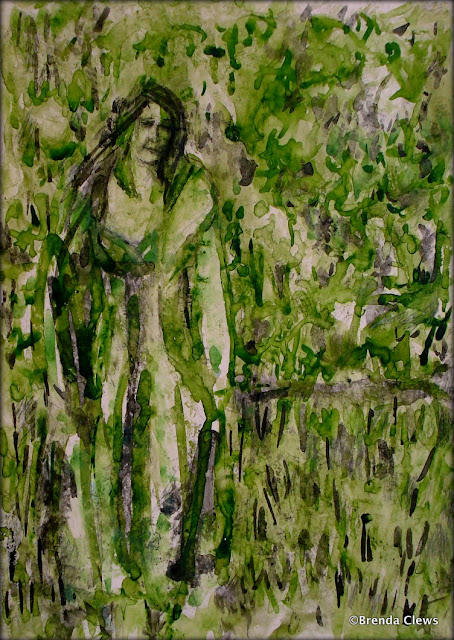 Notes on the painting:

A few layers of GAC-100 (artificial rabbit glue) on the paper prepares it for painting. I found the GAK gives you a little time to change your mind - you can dab the colour out before it sets permanently, so it is a little more forgiving than unsized paper which absorbs the colour instantly. It has a satin shine that is not like a varnish because it grabs the inks and sets them. It is faintly glossy, like brushed egg whites on cooked pastry, beneath the paint, which overlays it and is opaque. The GAK is not like a varnish because it is underneath the paint. It gives a luminescence to the painting that the camera does not quite capture.

I have no idea how you would varnish a piece like this. A matte finish would destroy that faintly glossy luminescence, and a satin finish would remove the deep opacity of the paint.

Which means, keep paintings like these in my book, or framed under glass. It is a fragile surface that I would not wish to intrude upon with a fixative.

A dimly wrought portrait of my daughter. Because I could not work with the paint for too long, I was not able to get a likeness. The woman in this painting is older than my daughter and does not really resemble her. Her energy is here, though.