Lacemaker: An Early Draft and Sketch

I wrote Lacemaker in July 2007. A week ago I recorded it on my iPhone, a quiet reading, and added a track in the background from the Music Text Composition Generator that I had entered the poem into. While the midi file that the MTCG created is layered a few times, the poem is its own music, yes.

A few days ago I was tidying my desk, and came across a notebook from that year, and found a drawing I did in Starbucks during lunch and a draft in pencil of part of the poem. Click for larger size. 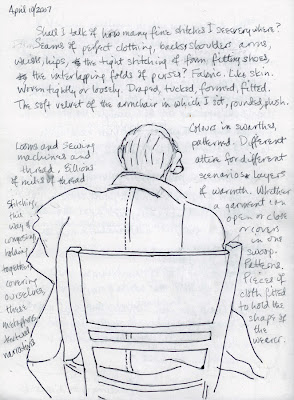 You can read the poem here: Lacemaker (it'll open in a new tab or window, which won't interrupt the recording if you're listening to it).
Brenda Clews
Comments

A poetry of what we do in our ordinary hours. I find the process of film interesting, especially relationships between characters-those interconnections, in their imagined and real manifestations. Sometimes (when I make myself get out pen and paper) I pause a film and quickly sketch the characters. These sketches are not meant to depict the actual film or actors in any kind of realistic way, or even be recognizable. They are dramas, really, to which I add my own words. You can imagine what is happening. If anything, these simple pieces are meant to be evocative: springboards, synchedoches, inductive rather than deductive, they need you to finish their stories.


(I had thought to collect my artpieces with poems, words, where the visual and verbal combine, that I've uploaded to Picasa, but, ahh. So it's growing of its own accord. :-)
Brenda Clews
Comments 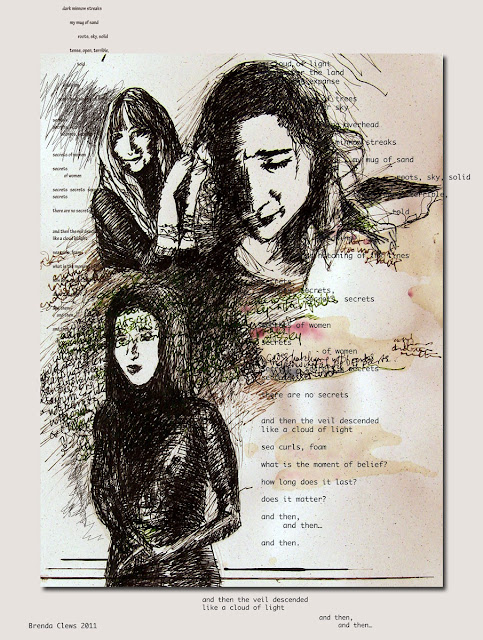 A voice recording (2:48min) as I was writing the words (you can hear the pen scratching on paper in some of it, my flipping through pages looking for written images, and the slowness of the process of writing). The speaking follows the writing fingers. I'm discovering the story of the drawing, the poetry of it as I write the words which are a mostly unreadable pictorial element around one of the characters like a cloud or veil or tree of words. But I didn't want a drawing of only dream words: words that are inaccessible because the viewer cannot read them.

It is an invisible intersection, where the words are slowly voiced as they are being written, created enroute, without knowing where they'll go, and the viewer/listener's responses which are evoked by the slow reading that allows time for meditation, for the meandering of thought.

And, these words are interconnected with thoughts and feelings that occurred during the drawing, which was done in three sessions over a month.

In the recording, which is 'real time' (mostly, I did stop and start my iPhone's voice memo a few times, and I cut out some dead space in editing), I'm reading what's being written rather than composing out loud. Unable to post as is, the flat voice, so I had to. Bamboo Music, a background.

Raw drawing; raw recording. No performance or finesse here. As it was happening.

The grace in living,
teapot, tea leaves, steeping.
She bends to pour.

When the waters
washed away the homes.
Clotted blood
of his wounds.
Petals floating on dirges.

Yet laughter of lovers,
her heart of memory.
Landscapes of green
move through us.

Comfort of the gentle
and exact tea ceremony.
Love is everything
the great artist sings.