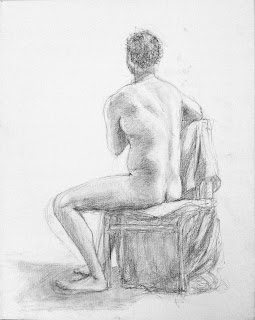 Sketch from TSA Friday night in pencil on a small canvas, 16" x 20", that I will finish as an ink painting. 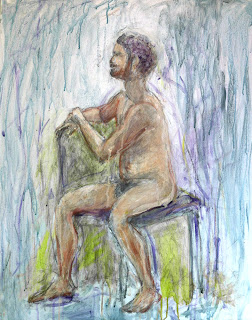 When I go to TSA non-instructional, drop-in lifepainting sessions, I usually spend the first 3 hours working on a larger painting; then I leave it to dry for the last hour while I sketch the model on a smaller canvas. At the top of this post you see the sketch that will become an ink painting. Below is the larger painting I did first. At TSA, I use thin layers of acrylics - they dry fast. To the left is what I completed at TSA on Friday night. At home, I finish the painting with oils - oil sticks, oil pastels, oil paints. 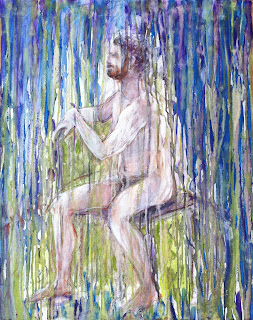 On the left is where the painting is today. It's still unfinished.

I'm considering putting a figure in black line only behind him, and some purple crocuses at his feet. To me, he seems a spring god, the spring rains and sap greens around him, a garden god who represents the fertility of the onrush of Nature's awakening after the long winter months.

Before the light was gone, on my walk through my neighbourhood this evening, I saw yellow tulips, small star-shaped blue flowers (which are? not phlox, or asters, but...?), yellow forsythias, and small magnolia trees just beginning to blossom. I may go by in the next few days with my sketchbook and see if adding a spring fauna to this painting will give it a fullness.

I have a wooden print block such as you might find in Bali for hand-printing fabrics in a random pattern, solid wood, carved, round, an article of artisanal beauty. It's been on a shelf 20 years. I've never used it before. Last night I swept iridescent acrylic paint over its carved surface and pressed.

My intention is to draw a figure or figures in ink over this background with some paint, perhaps daubed on with a sponge since the water-based pastel background will lift off the triple-glazed canvas sheet with water because it likely needs weeks to dry to a permanent finish.

Background1 is here (with no Balinese block imprints).

A time-lapse art video. I thought to paint some trees of significance to me for the Festival of the Trees which I hosted on my blog June 1st, and so hooked up the camera and recorded. The footage is sped up 1200%!

'One of the most beautiful pieces of art on earth is the bird's nest. Your video reminded me of a bird building her nest,' William, a Pastor who blogs, wrote. The sped-up video, ink, pen, paint, fingers, constructing the nest, the voiceover story, a nesting story - yes, I see it, and love the description.

The voiceover relates a tree story. The magnetism of certain trees. A story of my vision trees. About finding home through those trees. The voiceover is perhaps a bit loose - I begin by reading a piece and then just start talking - but I wanted something colloquial, expressing the extraordinary in the ordinary, a vision in a rambly monologue. It's a real story. I hope the way I've layered it into the video works for you.

This painting is my first landscape, maybe ever. I'm a figurative artist normally. But these trees are special.

The music is by dear Pierre-Marie Coedes, 'City night hubbub (instrumental)' from his album, "Lapses of Time." Pierre-Marie's music is a complex, sensitive interweaving of instruments and rhythms, and while eminently listenable, reveals riches on closer listening. Do check out his oeuvre at Jamendo.

__
A little on process. I began by photographing the trees, and sketched from them. Then I spent hours setting up my desk in my room, the video camera eventually tied to a monopod to a basket on top of a shelf. I had to run out to purchase a USB extension chord since the 10yo USB hub I was using took like hours to upload a half hour clip. Because set-up took so long, I mostly painted at night, hence the dark colouring on the skin tones, though I did white balance the footage in the video editing so the colours in the painting are good.

With the camera recording, I inked the trees in with some different coloured India and permanent acrylic inks with a dip pen, a couple of different greens in the sap/olive green range and some chocolate brown sepia. Even the sky is scratched in with a dip pen, using some gorgeous luminescent blues. Then I brushed an acrylic matt medium over the paper as a base  - a 300lb rag watercolour paper does not really need this base, but I like to give it that extra care before flooding it with water and oil paint. Yes, I paint with my fingers (all is now revealed!), but usually use a palette knife to score in 'negative space' lines in the paint. Due to the looming deadline for the Festival of the Trees, and wanting to get my submission ready, I scored the paper with my fingernails! It was wild. With hours of footage uploaded to my computer, I created a timeline and sped it up to about 13 minutes, and created a video file from this that I then further edited down to 8 minutes, added a title, credits, music, and a voiceover story. My mistake, I think, was to delete all 160GB of original footage before actually finishing the final version - even though I had a separately saved video file, Final Cut works by referencing. Whatever the cause, I had extreme technical difficulties saving a 1920 x 1080 HD video file converted for uploading to YouTube. Anyway, three days later I managed a 720HD version, that, at 3.5GB took YouTube 12 hours to upload, and am now only 4 days late for my own carnival!

A tree whose energy is perhaps conveyed by this image, with whom I feel a strong magnetic pull each time I pass. This tree played a part in my coming to live on the street you see here, I am sure.

Do you have a vision tree? Is there a tree, a tree who calls to you? Whose rhythms speak to you deeply. Whose energy resonates with yours. Is there a tree who has inspired you in your life, your spirituality, art, relationships, body? Remember this tree, the vision of this tree, whenever it was, or go there now, rest against the bark, listen to the wisdom.

My set-up for videotaping painting - how I shot the footage for the time-lapse art video. Camera -that little rectangular lit screen- is attached to a monopod that is tied with string to a desktop easel that is tied to a basket full of books. After noticing it in the photo, I did put a board under that lurching end and it was fine. The area is lit with two clamp-lamps with daylight bulbs. Not something I'd want to repeat too often, but after hours of trying this and that, with lots of adjustments, it seemed quite stable, and, more importantly, worked. 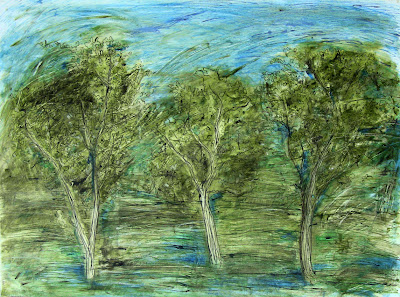 A painter on painting. Or, I'm painting again! Yay!

Wasn't a planned video, rather, thinking, many artists are showing themselves painting on-screen, let's put the camera on and get some footage, but I got talking, you know how it is, at night too though I managed to boost the light when I edited it, and now it's a bona fide video.

Enjoy. Hopefully you will find inspiration here for your own art, and might consider posting your own video.


Note: click on the base of the slideshow
to start the slideshow (or in the middle to
go to Picasa and see larger images).