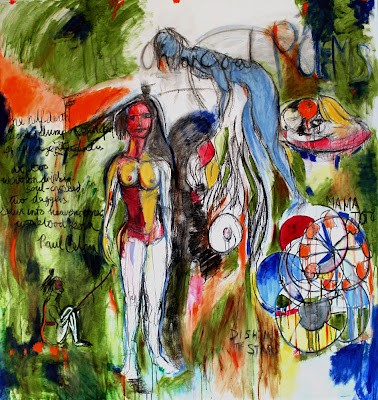 These paintings are like writing. In the way that characters come to an author, I find myself getting to know the figures who have emerged and understanding what they are doing, what they are conveying, and how they are part of the visual imagination.

Written in the painting, The Charcoal Poems, which runs through the blue man who is floating, and by the ferris wheels, MAMA TOTO, and DISH in the STARS.

In the painting, to the right of the woman, some lines from Paul Celan's, 'In Prague':

The half death,
suckled plump on our life,
lay ash-image-true all around us -

My mother died in the middle of September this year, and I began this painting a few weeks later. There are references, I think. See the little woman the larger woman is attached by a red chord to? Like a mini-version, an inner child perhaps. I don't fully know what all the images are about, though, like remembering a dream, I am understanding them.

This painting is like working in a dream. Nothing at all like my usual process. I think it's almost finished, except for working on the white areas, which I'm thinking to paint with tinted pastel whites from the palette here.

Assaad Chehade, a masterful Surrealist painter who lives in France, wrote, in a comment of an earlier stage of this painting:

I don’t see - there - Marc Chagall or Frida Kahlo or Jean-Michel Basquiat.

I clearly see Brenda Clews with its artistic preoccupations (colors, Charcoal, canvas, and other elements) and its concern language, and even its musical relationships. A set (colors, words, music) can be influenced at a time - As they say the apostles of art.- but it has - already - exceeds any influence. Even if idolatry was introduced with writing, I don’t see any aspect of "icon" in your work. But I will go - without hesitation - to the narrative form. Which we call a sense, and not defend sense. Something that belongs to all visual cultures of the world.

Brenda, you are in the process of promoting the spirit of intellectual vision of the idea. You are currently working on a wonderful thing, it is not internal to the painted surface, but between the canvas and the viewer. Good continuations.

An update on Sunday, Nov 11th:

Worked on this all day yesterday, thought it was essentially finished. I was rather shocked this morning - the purple is not so bright under daylight bulbs at night. Not a great pic, but I don't have access to a better camera today. When it dries a bit, I'll apply a grey wash over the purple to tone it down somewhat - adding some Payne's Grey to the Dioxazine Purple wouldn't have worked, I don't think. A later wash will be better, but, with oils, you have to wait, and wait, and wait..... 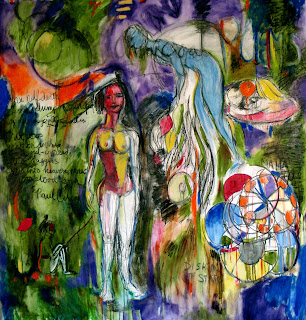 (Although I have had the bright idea to put some fans in front of it and to leave them running all night - since I use water-soluble oil paints, which dry faster than traditional oils (at least for working, they still need 6  months to fully set), I may be able to finish this painting tomorrow. Fingers crossed. I'd like to start a new one - having discovered that my favourite size is 5' x 5, it will also be large.)
___