Language is the cage though which I express my passion 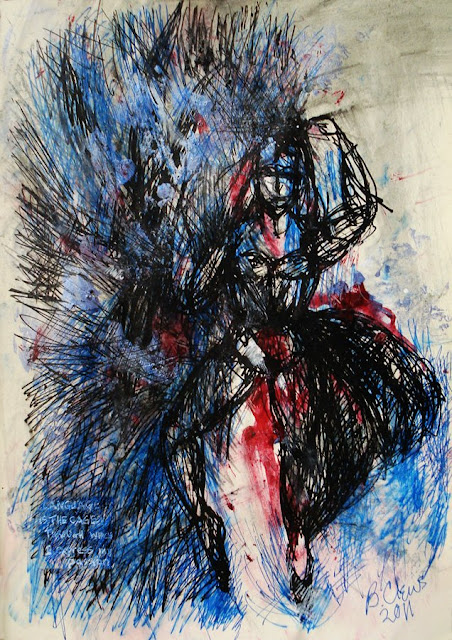 "LANGUAGE IS THE CAGE THROUGH WHICH I EXPRESS MY PASSION" 21cm x 29cm, 8" x 11.5", 2011, India and acrylic ink, gel pen, oil paint on Moleskine Folio Sketchbook A4 prepared with a base of acrylic matte medium.

After I had finished my NaNoWriMo writing early (10pm), and read some older poems I'd written, I got out my inks and paints... was up rather late with this Moleskine poem painting, tired today.

Among my papers were some prose poems I wrote on language some years ago and I suddenly felt an urge to break through language. Only, of course, you can't. Even visual representation, of any kind, is a pictorial language, learnt like anything else. But - the heart beating with its passion in the rib cage. The rib cage spread out in many (semiotic) lines. The dancer is an awkward figure, half harlequin I think, and eyes appeared in her breasts, which was unintended but apt. That rib cage became all of language invigorated (or enervated?) by our passion. It was a drawing I did thinking about these things, and perhaps it's a chart of them.

(Above and below were responses to comments at G+ by Raven M. Ridley and Larry Ayers, but way more than they asked.)

To me, she is a Spanish woman, don't ask why, in ballet shoes en pointe, with half a black skirt, only half, black hose to the ankle on the other bent leg, one arm clearly up, and wearing a corset with ribs (in which there are eyes). I thought of Frieda Kahlo when I added the red, again, no reason, can't answer why. The lines were like bobby pins springing outwards and opening. Her long black hair coming undone? Who knows.

And yet the heart remains in the rib cage; passion remains in the language that expresses it. I was thinking about Wagner's music, that Germanic passion, and the use of Tristan and Isolde in von Trier's latest film, Melancholia which I saw on the weekend, and Almodóvar, the Spanish director and the intense passion in his films. The blue is the sky, because we are always dancing in the sky.

What goes through an artist's mind while they are drawing or painting...