Coil of Koi in Dark Water 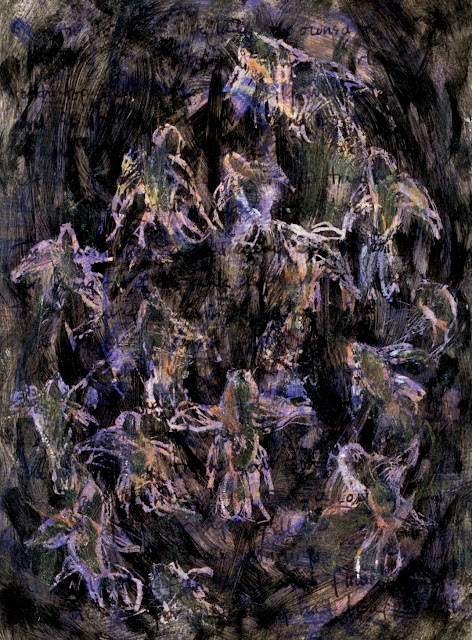 Finished, unless I slightly whiten some of those Koi edges. I sparingly brushed the koi with some translucent paints (vellum, blue, orange, yellow), which glimmer. The fish have a pearlescence that you can see if you tilt the painting in the light. 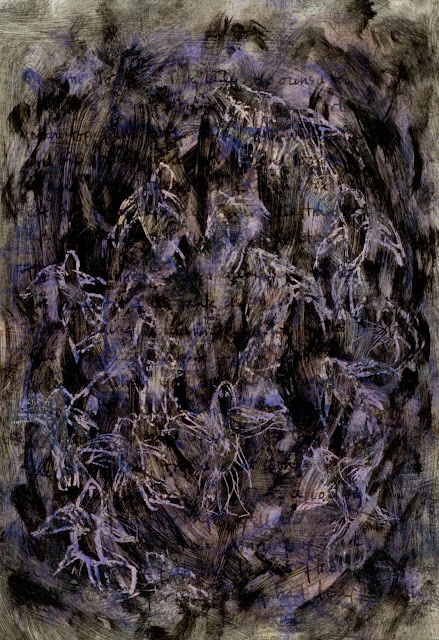 They are like angels rising in dark water, and I may have to just accept that.

From my recent NaNo novel: 'When the plump Chinese lady who owned the store came over to feed the koi, the fish swirled to the top of the tank, a mass of watercolours and oils coiling and curving and looping in and out of each other as each fish rose to eat bits of the koi feed. Their gills translucent against the misted windows of the store.

The glass thinned, melted and the koi are flung out of the tank as the water rushed out, a coiling, spawning tidal wave. The gills of the koi became soft wings, they grew like when you drop a stopper of ink into water and patterns of ink coil and flow outwards and upwards as they disperse. The koi’s filmy, translucent wings spread and grew thinner as they rose, a coiling mass of golds, oranges, yellows and browns, a living tree spinning upwards, a whirlpool of fish like leaves flowing into the sky, for the ceiling had disappeared.'